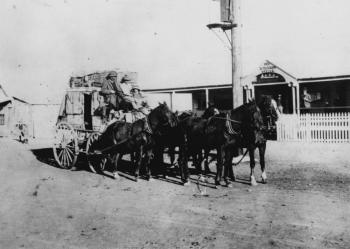 Transmission of information is one of the fundamental elements of human development. After the establishment of fonts, stones or clay tablets were used to their transfer. When more sophisticated types of materials (such as papyrus, leather, parchment, fabric, and last but not least paper) began to use, transmission of information started to take the form (to a certain extent) of the postal service as we know it today.

Traffic of reports reached its peak at the end of the ancient Romans. During the reign of the first Roman Emperor Augustus, at the beginning of our era, postal facilities called "cursus publicus" were created. It was a network of centers that served to transport messages, men and baggage under the guidance of special officers and undertakers. The designations for mail in Spanish (correo) and Portuguese (Correio) were created from the name "cursus publicus". Centres was twofold: Mansiones - a station used to the rest (apart roughly one day trip) and mutationes - horse exchange station (there was held change of horses). Each station had no special name, but they were marked by place e.g. "mansio posita in …"- station posed, established in … From the Latin "posita" was gradually created the word Post, which penetrated into European languages in the 13th century.

Traffic organization was based on a network of roads that connected Rome with all provinces (Via Appia - to Brindisi; Via Aurelia - to the Tyrrhenian Sea and Via Flaminia - to Rimini). The road leading to the vicinity of bend the river Danube by Slovak town Komarno was build on the network Via Flaminia.

The development of postal services in Europe

Cursus publicus was gradually declined after the fall of the Roman Empire in the 5th century AD until the 8th century, when Charles the Great started set up new postal routes from the territory of present France to Spain, Italy and Germany.

Gradually, messengers of ecclesiastical offices, monasteries and universities started to apper next to the king's messengers. Also buyers began to keep his special messengers who catered regular postal service between prominent European cities.

In the 15th century, when Prague became the seat of Charles IV., two postal routes led to the Czech country. First through Cheb, Loket, Kadaň, Žatec, Louny and Slaný and the other over Tachov, Kladruby, Plzeň and Beroun. In this century, an Italian noble family of Thurn-Taxis entered the history of European postal. Members of this family were indispensable postal couriers in the service of the papal curia. Theirs courier service was the beginning of the modern postal.

In 1490 a postal link from Austria to the Netherlands, France and Rome was established by the order of the Emperor Maximilian I. On the 3rd 1500 Maximilian's son Philip I. named Franz von Taxis to the front of the post office establishment and so he became the founder of thurn taxis-mail, which has developed a network of postal service in all the countries of Central and Western Europe.

In 1526 Emperor Ferdinand I.tasked the highest courtly postmaster Antonio von Taxis to establish a connection between Prague and Vienna. From the following year, this has become a permanent connection between the residential location of the Habsburgs. Ambrose von Taxis got the care of it and along with the title of postmaster in Prague he was also in charge of managing the Prague Post Office.

In 1615 Thurn-Taxis received the title of General Postmaster from the Emperor Matthias hereditarily and they kept it until 1867. But not in Bohemia, where this influence of Taxis to the management of post lasted only until 1564, when the highest postmaster Christopher von Taxis was deposed from this place for disorders and debts and was imprisoned in the White Tower at Prague Castle. The Viennese postmaster Pavel Wolzogen was then appointed instead of him.

In 1867 the Prussian post office bought ancestral privileges from Thurn-Taxis for 3 million silver dollars, and left them only the right to a free transfer of personal correspondence of family members.

Developments in the Czech Lands

In our country, the family of Paars purchased the rights to operate a Post in 1622, and held them until 1722, when the post office was partially nationalized. They were left only with the title and function of the highest degree of court postmaster. It was only in 1743, when there was a complete nationalization of postal services throughout the empire at the behest of Empress Maria Theresa. For the Paar's family left only the right to a free transfer of personal mail. However, even this ended with canceling the ancestral (noble) titles and privileges after the Czechoslovak Republic in 1918 was established.